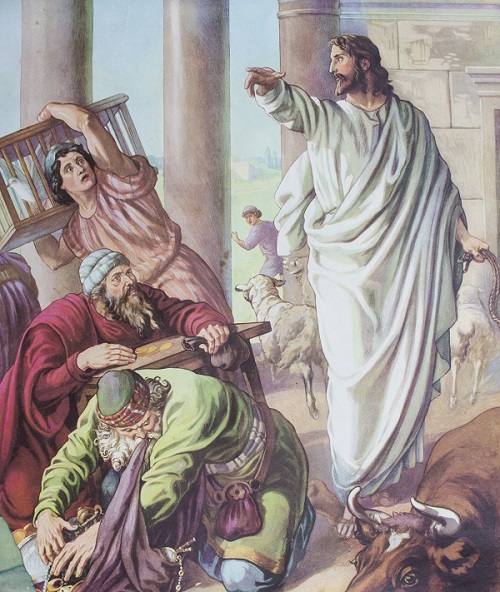 Why Did Jesus Cleanse the Temple?

Six months after His baptism, Jesus, filled with righteous indignation, cleansed the temple. (John 2:13-25, or read my blog, The Cleansing of the Temple)

Of course, another word for righteous indignation is anger.  But His anger was not like ours which is so often based on hurt pride or fear. Jesus’ anger was based on the distortion of God’s character and His own mission by the very priests and temple services that were meant to illuminate both.

God established the priesthood, the temple, and its services as a graphic demonstration of the entire plan of salvation and, ultimately, the eradication of sin. He intended it to reveal the true character of God, showing Him to be a personal, loving, and forgiving God, willing to lay down His own life for sinners.

God originally intended for pilgrims to get a clearer and clearer understanding of salvation each time they came to the temple, participated in the yearly feasts, and offered the sacrifice that represented Jesus’ death for their sins. The priests were supposed to help them understand the meaning of the services.

Unfortunately, the priests and rulers sabotaged the revelation of both God’s character and His salvation plan by transforming the sacrificial system from symbolic to transactional, much like the pagan religions. They represented it as a necessary act to appease an exacting God, to buy His forgiveness or blessing.

Additionally, the priests created so many traditions and rules to ensure the people complied with the letter of the law, that they transformed God from a loving, forgiving God into a tyrant. One example is the 600+ purification laws touching every area of life. It was impossible to live a normal life without breaking numerous purification rules. The rules proved such an overwhelming burden that the common people had nearly lost all hope of acceptance by God in this life, much less in the afterlife. (Mark 7:3-4, Matthew 15:3, Isaiah 29:13)

By the time Jesus cleansed the temple, the people revered the structure more than the God it represented; the same way they prized the knowledge of the scriptures rather than the God revealed in its pages (John 5:39). To them, the presence of the temple represented God’s favor. Its beauty was a source of national pride. They had long since lost sight of the message it was intended to teach. They believed they were saved by default, as children of Abraham, and by following all the rules and making the appropriate sacrifices. (Luke 3:8, John 8:39)

As Jesus stood that day in the outer court of the temple surveying the animal market and the moneychangers—approved by both priests and rulers—righteous indignation overwhelmed Him. He saw the despair of the common people, the poor, the lame, and the blind. The temple and its services did not serve to give them hope but only emphasized their misery.

The greed of the priests, rulers, and merchants denied any semblance of worship in the temple area. The exorbitant prices for sacrificial animals not only robbed people of needed money but also stripped them of any spiritual enlightenment in the sacrificial act. The noise itself was enough to drown out the temple services, much less any attempts to pray or praise God. Neither priests nor people expected to commune with God within its precincts. (Exodus 3:5; Habakkuk 2:20, Zephaniah 1:7)

Jesus knew this unholy traffic would result in the majority of the people misunderstanding His mission and the greed for both money and power would cause most of the priests and rulers to reject Him.

He wanted to clear away all the misconceptions of the people. He yearned for the priests to embrace the truth and teach the people to love and honor God rather than follow a set of rigid rules and customs that had little to do with a relationship with God. He longed to see the temple become a place where people could connect with God on an intimate level and grasp how their sins would be forever blotted out by the offering of the spotless Lamb of God.

Jesus could only do so much at a time for a people so steeped in faulty traditions and misapplied and misinterpreted scriptures. So, He drove out the animals, the greedy priests and leaders, and the crooked merchants. He restored peace to the temple courts. Restored a reverent atmosphere where people could ponder the revelations of God and grow closer to Him. Then, He sat and taught the people. He healed their diseases; blessed and encouraged them. He revealed God’s character to them in every look, in every touch, and in every word He spoke.

We face the same choice today. 1 Corinthians 6:19 states that our body is the “temple of the Holy Spirit”, and we are not our own. If Jesus showed up in your temple, would He find it so full of noise and the business of life that He would be unrecognized and unappreciated? If He took it upon Himself to cleanse your temple, would you choose to sit at His feet and learn from Him, or would you want to throw Him out for disrupting your plans, upsetting your beliefs, and inconveniencing your life?

The choice is yours to make… every single day.