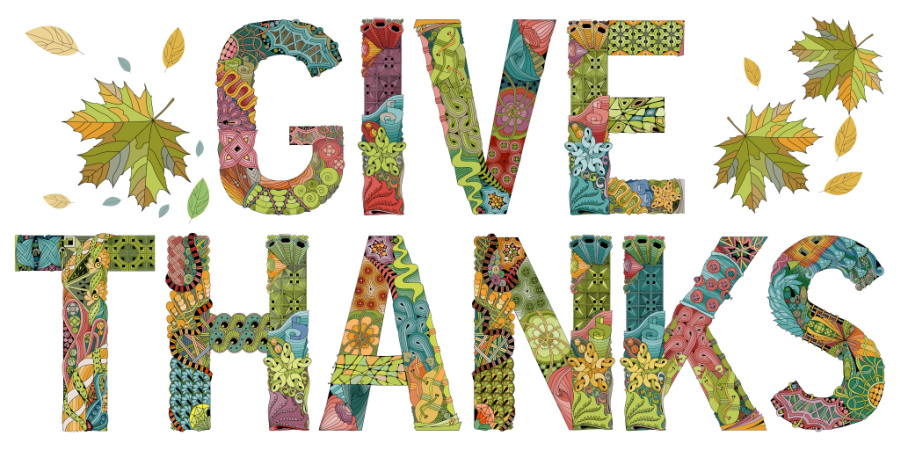 The Power of Giving Thanks

Have mercy on me, O God, according to your unfailing love;

according to your great compassion blot out my transgressions.

Wash away all my iniquity and cleanse me from my sin.

For I know my transgressions, and my sin is always before me.

Do you have sins that haunt you…sins that no matter how often you confess them, you still feel guilty for?

When you ask forgiveness for your sins, do you struggle to accept forgiveness from God, or anyone else for that matter?

I know that I certainly struggle with this, and it is obvious that David did as well. David committed numerous heinous sins when he allowed lust to run rampant in his heart.  Not only did he commit adultery with Bathsheba and get her pregnant, but he ordered her husband to be abandoned on the front line of battle to be killed by the enemy. Thinking he had covered his tracks sufficiently; he married the widow of Uriah. But the guilt caught up with him.

When I kept silent, my bones wasted away through my groaning all day long.

For day and night your hand was heavy upon me;

my strength was sapped as in the heat of summer.

Then I acknowledged my sin to you and did not cover up my iniquity.

I said, “I will confess my transgressions to the LORD”— and you forgave the guilt of my sin.

Since David could not forgive himself, he could not fully embrace the forgiveness God gave him either.  As a result, he did not feel that he had the moral authority to punish his son, Amnon, when he raped Tamar. The domino effect of this lack of moral leadership would be devasting.

First, Absalom felt he had to take justice into his own hands and kill Amnon two years later, creating a breach between David and Absalom that would never be repaired.

David’s guilty conscious also resulted in his unwillingness to perform his kingly duty of serving as a judge or even ensuring that the judicial system in his kingdom was functioning properly.  David’s inability to mete out justice in his realm allowed Absalom to wean the affection of the people away from David by insinuating that if he had the power, he would make sure that the people received justice.

Once he had the people’s affection, he attempted a coup. And Ahithophel, one of David’s most trusted advisors—who was also the grandfather of Bathsheba—resentful of David’s actions with his granddaughter and tired of his lack of leadership since that time, joined Absalom’s rebellion.

The fallout was catastrophic, to say the least.  David lamented in Psalms 51 that “my sin is always before me.”

Certainly, the devil had no small part to play in that. Revelation 12:9-11 identifies him as the “accuser of our brethren, who accused them before our God day and night.”  Once cast out of heaven, the devil transferred the focus of his accusations to us, working tirelessly to keep our sins always before us. It is a very effective weapon. Like David, it weakens our faith, diminishes our witness, and prevents us from exercising our faith to make necessary changes in our lives. It can drive us into addiction, escapism, self-hate, or an endless spiral of failures through self-sabotage.

How can we avoid becoming a prisoner of guilt as David did?

By taking hold of God’s “great and precious promises” and utilizing the biblical steps for receiving their fulfillment.

His divine power has given us everything we need for a godly life through our knowledge of Him who called us by His own glory and goodness. Through these He has given us His very great and precious promises, so that through them you may participate in the divine nature, having escaped the corruption in the world caused by evil desires. 2 Peter 1:3-4

What are the biblical steps for receiving the fulfillment of these great and precious promises?

I call them the ABGTs of Prayer.  Ask, Believe, and Give Thanks.

Therefore I tell you, whatever you ask for in prayer, believe that you have received it, and it will be yours.

John emphasizes that what we ask for must be in accordance with His will. The condition met, we can rest assured that He has both heard and given us what we asked for.

“This is the confidence we have in approaching God: that if we ask anything according to his will, he hears us. And if we know that he hears us—whatever we ask—we know (believe) that we have what we asked of him.” 1 John 4:14-15 (Parenthesis added)

The last step, Give Thanks, Jesus exemplified when He raised Lazarus from the dead.

Then Jesus looked up and said, “Father, I thank you that you have heard me. I knew that you always hear me, but I said this for the benefit of the people standing here, that they may believe that you sent me. John 11:41-42 (Emphasis added)

Jesus was asking for something He knew was within His Father’s will.  Therefore, He knew that the Father heard Him. (See 1 John 4:14-15) Accordingly, He knew that He already had the answer, and He gave thanks that He had received it.

Did you know that the Bible states more than 100 times that we should give thanks to God for the things we receive from Him?

And Paul actually presents the idea of giving thanks as an integral part of the will of God for us.

Rejoice always, pray continually, give thanks in all circumstances; for this is God’s will for you in Christ Jesus.  Do not quench the Spirit. 1 Thessalonians 5:16-19

So what does this look like in real life?

Ask forgiveness for each sin.

If we claim to be without sin, we deceive ourselves and the truth is not in us. If we confess our sins, He is faithful and just and will forgive us our sins and purify us from all unrighteousness.

This process has two main benefits.

Quote the promises that show God’s will and His ability to forgive you.

If you believe, you will receive whatever you ask for in prayer.”

This step helps train your mind to believe God can and will do what He says He will.

Write out the Bible promises related to the forgiveness of sin.  You can write them on 3×5 cards, in the notes on your phone, or in a google doc so you can access them anytime, anywhere.

However, I encourage you to find the Bible promises on forgiveness of sin that are meaningful to you and utilize them.

Give Thanks that He has already done it.

Do not be anxious about anything, but in every situation,

by prayer and petition, with thanksgiving, present your requests to God.

Turn the Bible promises from step two into prayers of thanks for what God has already done.  Here are some examples to get you started.  Be sure to create your own prayers based on your favorite verses so they are meaningful to you.  These are just examples.

1 John 1:9: “Thank you Father that since I have confessed my sin and since You are faithful and just, then I can rest assured that You have forgiven my sin.  Thank You that You have not only forgiven my sin but that You are cleansing me of my love for it. Thank You that You are changing my desires and my thoughts about it so that I will recognize it when I am being tempted and learn to abhor it.”

Psalms 103:12: “Father God, thank You that You have forgiven me and removed this sin from me as far as the east is from the west.”

Romans 8:1: “Thank You, God, that because I confessed my sin and You forgave me, I can reject these feelings of condemnation.  They are not from You.  Thank You that I am now hidden in Christ Jesus.”

The real power of the ABGTs of prayer to break out of the prison of guilt is in giving thanks for what God has already done.

Generally, we are very good at asking for forgiveness, but we really struggle with believing that God has done it. And we rarely ever give thanks that He has already done it. However, doing so builds our faith in Him and reinforces the belief that He has forgiven us.

Let me illustrate it this way. Let’s say you are thirsty and you ask a friend for a drink of water. They fill up a glass and hold it out to you. To quench your thirst, you must reach out, take the glass your friend is offering, and drink from it.

The same is true of forgiveness.  Once you ask God to forgive you, you must grasp the promises by quoting them (memorizing them makes them even easier to refer to when you need them) so you know what God is ready and willing to do.  Then you drink the forgiveness by thanking God for what He has already done.

Remember, God is “faithful and just to forgive us.” His forgiveness is not dependent on how you feel. It is not dependent on whether you feel worthy of forgiveness, or whether you actually feel forgiven after you ask. Jesus died to give you the privilege of being forgiven for your sins. You are forgiven not because you deserve it and not because you feel it, but because Jesus earned the right to do it through His death and resurrection. And, He is faithful when we are faithless.

So when the devil comes to accuse you of a sin that you have already confessed, say:

“I confessed that sin and Jesus has forgiven me.”

Then begin praying the promises and thanking  God for having already forgiven you for it. Do this as long as it takes to drown the devil out, to break that guilt record that plays constantly in your mind, and to train yourself to believe that God has done what He said He will do.

Jesus quoted scripture to overcome the devil and it is your privilege to do the same.

Do not allow your past to control you any longer.  Step out of the prison of your guilt through the grace and power available to you through God’s divine power and his “great and precious promises.”

** All Bible verses quoted were taken from the New International Version.