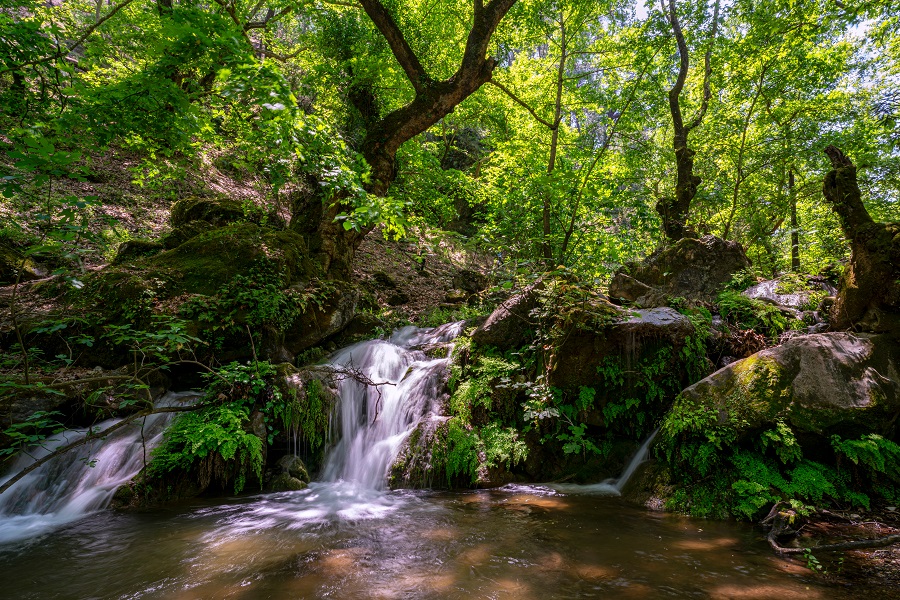 When the Passover celebration finished, Jesus and his disciples left Jerusalem and went out into the Judean countryside to camp near the Jordan for several months. The crowds traveling to the area to listen to Jesus teach grew larger every day. Many of those who listened to Him requested baptism. Though Jesus did not personally baptize them, His disciples did.

John the Baptist camped, with his disciples, a two-day journey away from them at a place where several streams converged and formed a decent size pool for baptizing near Salim. Though the crowds coming to listen to John were decreasing, he was still baptizing people.

Returning from town after buying supplies, John’s disciples encountered a group of Pharisees heading toward town. Obviously, John had dismissed the crowd for the day because this was not the first group of people they had encountered on the path. Inclining their heads and stepping aside in deference to their rank, they waited for the Pharisees to continue on the path. But they didn’t.

The leader of the group, a medium-sized stocky man, looked them over carefully. He smiled. “Aren’t you John’s disciples? I think I have seen you with him before,” he said.

“Good. My name is Rabbi Yoel. I hope you can answer a question for me.”

The disciples glanced hesitantly at each other. Then, Eli stepped forward. “We’d be glad to answer your questions. We welcome all seekers of truth.”

Rabbi Yoel’s smile slipped a little as he looked sideways at his followers, “Yes, of course,” he muttered.

He cleared his throat and looked directly at Eli, “We were just wondering whose baptism was most effective for cleansing the soul from sin, John the Baptist’s or Jesus’s?”  He paused a moment to study their reactions. Then, before Eli could respond, he continued, “We left Jesus just three days ago and I can tell you that the crowds around Jesus are much larger than John the Baptist’s are now.”

It was like a double punch. Eli’s defenses came up. Was Rabbi Yoel really trying to say that John’s baptism was not as effective? Or, that Jesus was taking over John’s ministry? That was absurd.

Collecting his thoughts, Eli responded, “It’s obvious that John the Baptist’s is the true baptism because Jesus Himself came to John to be baptized. Jesus is only following his example.”

Rabbi Yoel furrowed his brows and nodded, “Funny. In all the time we were there, I never heard Jesus refer to John the Baptist.” He paused seeming to think deeply then turned to those with him, “Do you remember him saying anything at all about John the Baptist?”

The others solemnly shook their heads.

Rabbi Yoel turned back to Eli and the other disciples, “However, he is preaching repentance, much like John the Baptist. I am simply confused about whose baptism is the true baptism, the one that actually cleanses from sin.”

Eli stood speechless with anger. Avner stepped forward, “John is a great prophet. An angel foretold his birth. In fact, it was a miracle. His mother was well past childbearing when she miraculously became pregnant with John, just as the angel said she would. His mission is to bring a great revival in Israel to point our people back to the true worship of our God. That’s why he teaches repentance and baptism to wash sins away. God Himself commissioned him for this ministry. Are you trying to insinuate that his ministry is not valid?”

Rabbi Yoel took a step back and raised his hands, “I’m just asking a legitimate question. If John’s baptism is sufficient, why is this Jesus starting his own ministry and allowing his disciples to baptize? They don’t even use the same words when they baptize as your John uses.” He stroked his beard for a moment and then said, “Maybe I will go ask Jesus’ disciples which is most effective before I make my decision.”

Motioning for the other Pharisees to follow him, Rabbi Yoel headed up the path past the disciples.

Once they disappeared, the disciples turned and looked at each other, confused and angry. In truth, Rabbi Yoel had voiced some of their own questions, and it gulled them that they didn’t have a good answer.

Eli hissed. “He’s lucky I AM John’s disciple. A few months ago, I wouldn’t have thought twice about punching him in the face.”  The others chuckled and the tension eased.

Avner sighed. “I don’t think John knows about what’s going on with Jesus. Or maybe he doesn’t realize how much it’s hurting his ministry. I think it’s time we tell him.”  The others nodded and followed Eli as he turned onto the path and headed for camp.

They found John reading the scroll of Isaiah. He looked up as they came to stand before him.

Eli came right to the point, “Rabbi, you know that guy you baptized on the other side of the Jordan, the one you said was the Lamb of God? Well, he has started his own ministry and his disciples are baptizing people. Everyone is flocking to him. That’s why the crowds are so much smaller than they used to be. You’ve got to do something to stop him.”

John studied each of their faces, reading the anger and confusion. They were zealous for his honor, he knew. Rolling up the scroll and laying it aside, he motioned for them to sit down while he collected his thoughts. “God,” he prayed silently, “give me the words they need to hear. It’s critical that I say the right things so that I don’t damage Jesus’ ministry.”

Looking at them steadily, he said, “God selected me for this ministry, and it is His decision what happens to it. You yourselves heard me say that I am not the Christ. I am simply the messenger sent before Him.”

John paused trying to figure out how to explain it to them. Suddenly an apt analogy came to his mind. Thank You, Lord. Smiling, he began. “It’s like I am the best man at the wedding and Jesus is the bridegroom. The best man is not there to take possession of the bride. Rather, he is there to make sure everything goes according to plan so that the bridegroom can marry the bride. He looks forward to the celebration not because he will be the center of it or because he will receive the bride, but because he is pleased to hear the joy in the bridegroom’s voice and watch the marriage take place. That is the delight I am experiencing now. My mission is accomplished. All the focus should turn to Him and stop being on me.”

Daylight had disappeared as he spoke, but the flames from the fire allowed him to see the disciples’ faces. He could see they were still confused and upset. As he silently prayed for wisdom, words formed in his mind. He began sharing them.

“Even though God commissioned me as His messenger, I am only human and can only speak of the things that God has revealed to me. However, Jesus came here from heaven, and He is greater than all humans. He speaks about things that He has personally seen and heard. Unfortunately, very few receive His teaching. The few who do receive His testimony prove by their transformed life that God is real. God sent Jesus here and the words that Jesus speaks are the words of God because Jesus is one with the Spirit, unlike humans who only allow the Spirit to reside in them by small measures that grow over time as they learn more and more about God.”

He stood and walked to the woodpile. Selecting three chunks of wood, he piled them on his arm and returned to the fire. He took his time laying each piece strategically on the coals so that they would catch fire and burn better. After arranging the last piece to his satisfaction, he returned to his seat. As he looked at them, he prayed. “God, I am not sure I fully understand what You are revealing, and I know they don’t understand it. Help me clarify it even further.”

As his mind filled with words from the Spirit again, he began to speak. “The relationship between God the Father and the Son is stronger than the love between an earthly father and his son. The Father has entrusted this special mission and incredible truth to His only Son. Those who believe in the Son will enjoy everlasting life, but anyone who refuses to believe in the Son will surely die because the wages of sin is death.”

His disciples remained silent, still trying to absorb all that John had said. John stood, picked up the scroll of Isaiah, and returned it to the trunk in the cave for safekeeping. Then, he took his favorite path up the hill to his usual spot of prayer. The Spirit had inspired him to say things that even he didn’t fully understand. He needed to take time to meditate on this new revelation and ask God to help him understand it all. He also needed to pray for his disciples.