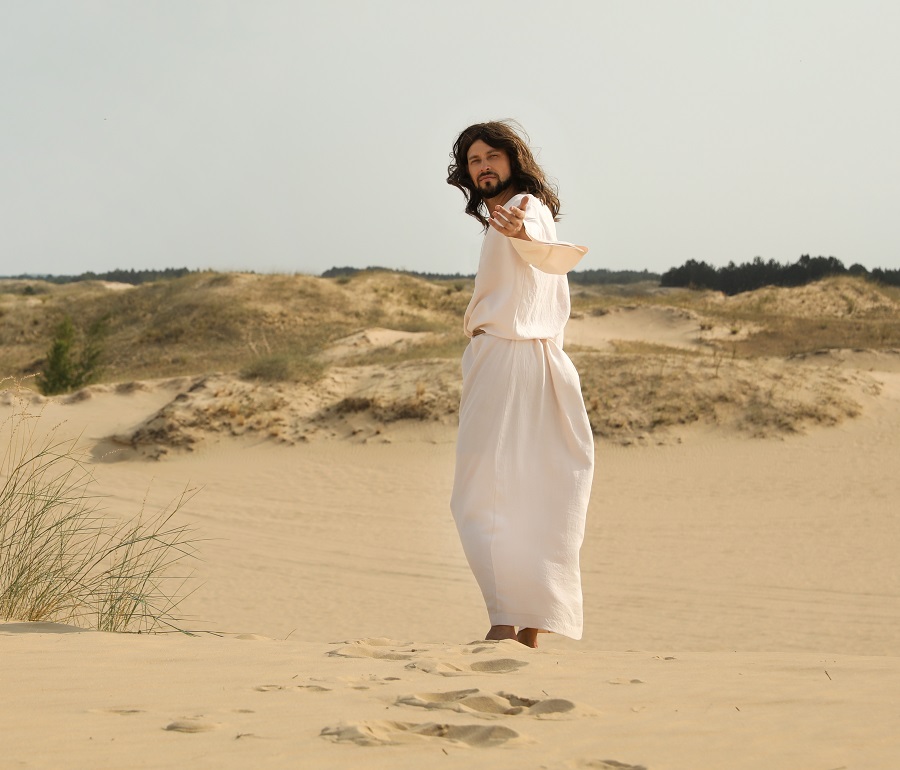 For the third day in a row, as John was standing next to the river with his disciples, he saw Jesus walking along the edge of the crowd.

Excitedly he pointed to Him and said loud enough for the whole crowd to hear: “Look!  It’s the lamb of God.”

The crowd recognized that John was referring to the same skinny commoner that he had pointed out the day before, but this was a strange way to identify Him.  John didn’t call him the Messiah.  What did he mean—the lamb of God?

But two of the disciples who were standing with John, who had also seen John baptize Jesus and had heard John identify Jesus as the Son of God, were convicted by John’s repeated declarations.  They looked at John and then at each other.  As one they turned and made a beeline for where they could still see Jesus’ head above the crowd.

Once clear of the crowd, they began following Jesus everywhere he went, but they were afraid to actually approach Him and ask him questions.

Jesus pretended He didn’t know they were following Him as He walked around the crowd and even talked to a few people.  Finally, He began to walk down a path that led away from John the Baptist and the crowd to see if they were serious enough to follow Him away from their master.  As the two disciples continued to follow Him, it warmed His heart that these two honest seekers had responded to John’s testimony so directly.

Once they were well away from the crowd, Jesus turned, smiled, and asked them, “What is it that you want?”

It was already about 4:00 p.m. and the disciples knew that what they wanted to discuss with Jesus could not be answered quickly there on the road.  So they humbly asked, “Teacher, where are you staying?”

Jesus instantly understood that they were truly interested in getting to know Him and His mission.  Theirs was not a simple question with a straightforward answer.

With a glad heart and a huge grin, Jesus invited them, “Come and see.”

The two disciples, one being John the beloved, and the other Andrew, Simon Peter’s brother, went to where Jesus was staying and asked Him all the questions that had been in their minds since they first saw John baptize Jesus.  Then they listened intently to Jesus’ answers.  They didn’t understand everything He said, but the more they listened, the more convinced they became that Jesus was the Messiah, just as John the Baptist had said.

Finally, when there was a lull in the conversation, Andrew excused himself.  He couldn’t wait any longer to share the news. He went in search of his brother, Simon.

When Andrew found Simon, he excitedly told him, “We have found the Messiah.”

Simon, after listening to what Andrew had to share, though still somewhat dubious, followed his brother to where Jesus was staying.

Before Andrew could even begin to introduce Simon to Jesus, Jesus looked at Simon and smiled in welcome, saying, “You are Simon, the son of John.  You shall be called Peter.”

At that, Simon Peter’s doubts left him. Without hesitation he decided to stay and learn all he could from Jesus along with Andrew and John.

The following day, Jesus had plans to head for Galilee to visit family, but before He left the area, he went looking for Phillip.

Now Phillip was of Bethsaida, the same town that Andrew and Peter were from, and when he saw that they were following Jesus too, he gladly went along.  When Andrew, Peter, and John shared what they had learned about Jesus, and Phillip had talked with Jesus himself, he was convinced that Jesus fit the prophecies and therefore He was the Messiah.

As soon as Phillip realized that this was the true Messiah, he wanted to share the news with his best friend, Nathanael.    Phillip and Nathanael met nearly every day in a secluded area under a fig tree to pray and study the scriptures to learn the truth about the coming Messiah.  So, Phillip went there, looking for Nathanael.

When he found him, he told him, “Nathanael, I have great news! We have found the One that Moses and all the prophets wrote about. The One that fulfills the prophecies we’ve been studying.  His name is Jesus.  He is from Nazareth, and He is the son of Joseph the carpenter.”

Nathanael looked at him in shock and asked, “Nazareth?  That’s not even part of Judah.  It’s a tiny backwater town in Galilee.  Can anything good come out of Nazareth?”

Phillip smiled and beckoned to him.  “Come and see for yourself,” he told him.

Nathanael shrugged.  He’d known his friend too long not to trust him.  Nevertheless, he had his doubts as he followed Phillip to Jesus.

Jesus and the other three disciples were preparing a meal when Phillip returned with Nathanael.  When they got close enough to carry on a conversation, Jesus turned and looked directly at Nathanael and said to the others, “Look, here is a true Israelite in whom there is no deceit.”

Nathanael was so astonished his mouth dropped open because he knew that he had never met Jesus personally at any time.   When the shock had worn off enough that Nathanael could close his mouth, he asked the question that burned in his brain, “How do you know me well enough to know my character like that?”

Jesus smiled and quietly stated, “Before Phillip invited you to join us, when you were under the fig tree studying and praying, I saw you.”

Goose bumps sprang out on his arms and the hair at the back of his neck stood on end.  Only God, the Messiah could have powers such as that.  Reverently, Nathanael said, “Teacher, without a doubt, You are the Son of God.  You are the King of Israel.”

Jesus chuckled happily, “Oh Nathanael, because I said I saw you under the fig tree before Phillip came to get you, you believe?  You will see much more powerful evidence than this in the days to come.  In fact, ” and here Jesus eyes seemed to focus beyond Nathanael on something in the future, “I tell you the truth, you will see heaven open and the angels of God will ascend and descend upon the Son of Man.”  His eyes focused on Nathanael again and they just looked at each other for a few seconds.  Then Jesus smiled and turned back to the meal preparations.

He looked at Phillip questioningly who simply shrugged and turned to introduce Nathaniel to the other three disciples. He knew them by sight because he’d seen them often enough listening to John the Baptist, but he didn’t know them personally.  He let his mind be diverted by the conversation and tucked Jesus’ comment in the back of his mind for the time being.

When the meal was ready, they all sat down to enjoy the food, the fellowship, and especially the conversation with Jesus.

Previous Blog in this series: John 1:1-34 in Story Form

New to my blog?  Click Here to receive a free gift and get notified of new blog posts.